The IMATS London make up event. 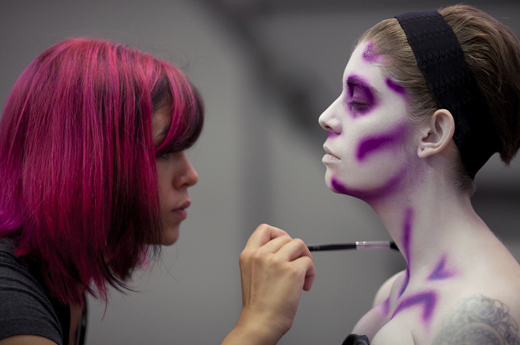 Twelve years in the making, the IMATS London event brings together the best of the best in the makeup industry, showcasing a range of talents from theatre, film, television, fashion and editorial backgrounds.

The event is a fantastic networking opportunity for established makeup artists and those who are just starting out in the industry: with cases, talks and top exhibitors on display, there is something for every kind of talent and make up palette.

Taking place from June 27th-29th at London’s Olympia, IMATS will feature the biggest names in the industry, from Bobbi Brown to MAC Cosmetics.

Those who are new to makeup artistry should attend the event’s informative talks. Renowned makeup artists to the stars Sarita Allison will be sharing her experiences of painting some of today’s most famous faces, including Bjork, Alexander McQueen and Ben Kingsley.

For those interested in costume make up, master craftsman Nick Dudman will be holding a talk to share his tips. The BAFTA award winner has styled the stars of Harry Potter, Batman, Labyrinth, Indiana Jones and Star Wars, so expect some very interesting anecdotes from the man who created Yoda.

IMATS will also be holding its very own competition, Battle of the Brushes, in which prizes will be awarded to competitors from recognised makeup schools, who can enter photos of their own unique makeup looks. Day 2 will feature a competition for prosthetics based around a comic book genre, while Day 3 will go into the fantasy realm with the theme of Art through the Ages.

This worldwide event has spanned cities all over the world from Los Angeles to London, and will continue to take place in Sydney and Toronto. If you’re flying over to England’s capital to take part, be sure not to miss out on some of the other attractions the Big Smoke has to offer.

Amongst its red buses, big wheels and Buckingham Palace, London is also host to some great casinos. Close by you’ll find The Empire Casino in London’s hip and happening Leicester Square, but if you’ve never gambled before, you should probably try practising in an online casino first. You can also put to practice all the wonderful makeup tips you’ve learned in the day’s events.

Whether you’re a movie maker, makeup artist or are just looking for a new career, the IMATS event cannot be missed.